A History of the Christ Church Organ

The original instrument was built and installed in 1864 by the William A. Johnson of Westfield, Mass, then one of the leading manufacturers of pipe organs in the country. It was one of the first pipe organs to be introduced into Reading churches. The instrument was restored and rebuilt in 1906 by Edward A. White of Philadelphia. During the tenure of Harry Berlin as organist choirmaster, Mr. Hunter Eckert and his sister donated a “new organ” to Christ Church as a family memorial in 1911. From the contract of June 12, 1911, signed by Basil G. Austin of the Austin Organ Company and Mr. Eckert the following can be read: “The Austin Organ Company reserves the right to use any of the good old pipes in the present instrument, which, when thoroughly renovated, revoiced, and brought up to proper pitch, will be guaranteed as being practically equal to new.” Of the 24 ranks of pipes in the 1911 instrument, parts of the 16 ranks came from the old Johnson. The cost of the 1911 rebuild was $6,500.

In 1953, the Austin Company again rebuilt the instrument, adding a new console, new swell engines, new reservoirs, and six additional ranks of pipes, and replacements for five other ranks of pipes. The cost of this project was $19,259, and it was carried out during the tenure of Miss Evelyn Essick as organist and choir director.

By the 1970’s the old organ, now in use over 100 years in various forms, was again showing signs of serious deterioration. It was decided to raise money for the complete rebuilding and tonal augmentation of the instrument in conjunction with the 150th anniversary of the consecration of the building by Bishop White in 1826. From the original list of seven builders the Music Committee and Vestry decided upon Lehigh Organ Company of Macungie, Pennsylvania, and a contract was signed in March, 1975 for debut in 1976,

The Lehigh Organ Co. was headed by John C. Gumpy, an independent organ builder whose career began in 1963 and whose organ building apprenticeship was with Edgar Mangam of the Schantz Organ Company.

The organ was designed by Bruce P. Bengtson in consultation with Mr. Gumpy in keeping with the needs and demands of the Episcopal service, congregational singing of hymns and chants, choral and solo accompaniment, and performance of the great literature for the instrument from all countries and time periods. The organ retains some pipes from the original Johnson organ and at that time comprised 60 ranks playable from the three manual and pedal console. In 1980 the organ received a 32 foot reed (Kontra Posuane) which supports full organ registration.

In the fall of 1999 the very old 1953 console, suffering from fatigue, was removed for refurbishing. There was a resurfacing of the manual keys with “ivorite”, and a conversion from stop tabs to draw knobs. The electrical system was rewired to host an electronic combination action.

Four new stops were added including the only electronic stop which is a 32 foot untersatz. This is provided through two very large speakers on the south (Gospel) side of the instrument. The organ is presently maintained by the Gibson Organ Company in New Jersey. 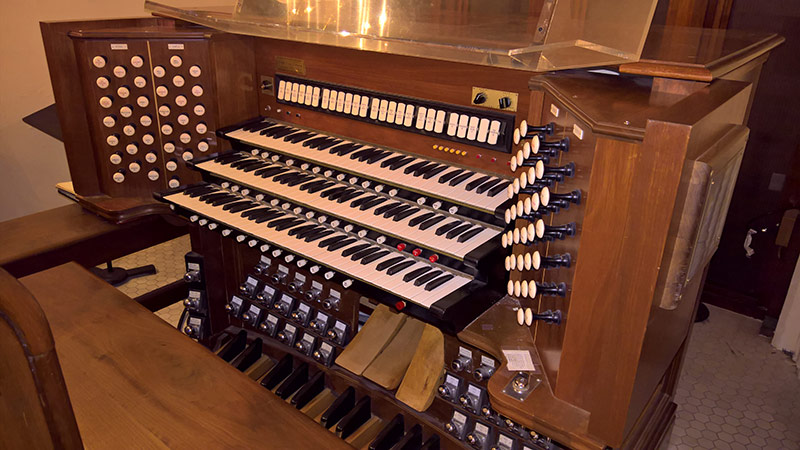